The Girls From Brookwood

When inspiration strikes, honor it.

I wrote that sentence in a blog a while back, and I needed to remind myself today that it's OK to take breaks. I was in the middle of running around with a million things to get done, but I can't stop thinking about the incredible experience I had yesterday morning. I need to write about it, because the girls from Brookwood inspired me...

I was contacted about a month ago by a newly-formed organization called High Hopes in High Heels, asking me to do a hoop dance workshop at a place called Brookwood. Brookwood is a housing dorm dedicated to providing troubled adolescent girls with an alternative living environment and therapeutic program encompassing education, employability skills, independent living training and counseling that will prepare them for self-sufficiency and/or successful family reunification. In other words, these girls have been through a lot and Brookwood is helping to set them up for success in life.

Our workshop was scheduled to begin at 10 a.m. on Sunday. When Shellie and I got there, a few of the girls looked at us like we were crazy, as we carried about 40 brightly-colored hoola hoops into the cafeteria. I think others were curious, but the reception certainly was not warm. The majority of the young women who live at Brookwood are between the ages of 12 and 18. Apparently, they like to sleep in on Sunday mornings and aren't required to be downstairs until 11 a.m. But on this morning, the supervisors made rounds, waking up the girls who were still sleeping, to notify them of our workshop. I'm sure that the early morning wake up call didn't make us more popular among the group. About 20 girls showed up, many rolling their eyes or groaning, and most were still wearing their pajamas.

I knew that we had to make a good impression in order for them to take us seriously (or even express an interest in what we were doing). So, as the young ladies filed into the room, Shellie and I had the music pumping and were busting out all of our tricks. We freestyle hoop danced to high-energy music as the girls watched. Afterwards, I talked about the art of hoop dance and how the hoops we use are made for adults, which make them easier to use. I told them that they could learn all of the things that Shellie and I were doing, too.

When we invited the girls to participate, about half of them chose to sit out. But the ones who did give it a try were feeling good and accomplished as they danced with their hoops. They must have inspired the others... It was a beautiful thing watching the seated girls get up and join in.

As they danced, I asked them if they've ever had a bad day, felt ugly or sad. They all raised their hands. I told them when I feel that way, I start hooping and the rhythm makes me feel better. I explained that it's really hard to be pissed off when you're hoola hooping. We talked about how hoop dance automatically makes you smile and is a good way to feel good and let go of stress. I encouraged them to explore the space around them and be creative with their movements. Shellie and I then split the girls into two groups, and we taught them some tricks. I loved watching them giggle and smile, especially the ones who were most skeptical in the beginning. It was really interesting, though. It seemed as though some of them were afraid to smile and be happy. I remember one of the young ladies telling us that she never has fun, and she never laughs.

But as Shellie and I played, the girls loosened up. We wanted to provide them with a safe space and communicate a message that they are all beautiful and worthy of love. Each of the girls had stories. I can only imagine what they've been through. It's hard enough being an adolescent girl, much less one who has been abandoned or abused. We were there to provide support and encourage them to dance, move, play. Throughout the workshop, we told them they were beautiful and that they were blowing our minds with how quickly they were learning. We were just speaking from our hearts because everything we said was true.

As the workshop came to an end, we had a group hoop jam. The girls formed a circle. Those on the outside clapped and cheered for the girl in the middle. One by one, they rocked out with their hoops - while we all supported each person during their turn. Girls who were snapping at each other at the beginning of the class were now cheering for one another. When the hoop jam ended, they begged us to stay just a little longer. Some asked for hugs, and others actually had tears in their eyes when we said goodbye. One sweet young lady even wanted our autographs. The funny thing is, I felt like they were the celebrities. They brought us so much joy and melted our hearts.

We left a hoop behind for them to play with and gave them our contact information and asked them to stay in touch. I know that we'll be back soon. This is one of the many reasons why I love what I do. Movement meditation heals, and I'm grateful for experiences like these. There is beauty all around us. We just need to take the time to stop and notice it. 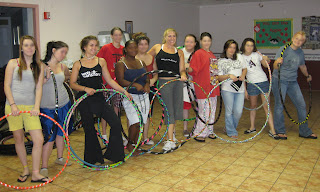 For confidentiality reasons, the faces of these beautiful girls have been blurred.

This post totally moved me - thanks so much for sharing Abby! You (and your hoop!) really are putting good into the world. Makes me excited about my own journey as hoop teacher...which shall begin tomorrow, providing anyone shows up!

I am honored to be a part of this beautiful web you weave, my sister! Thank you for being present as we change the world, one hoop jam at a time :)

A huge thank you to you and Shellie for making such an impact on these girls is such a short amount of time! It's amazing what a smile and words of encouragement can do!

Ginger - thank you for your comment (I just switched out the photo so the girls' identity will remain confidential). We look forward to seeing you and the girls again very soon.

Claudia and Shellie - my MonSTAR girls... I'm so grateful to have you both as friends and sisters within the circle. We WILL change the world with positive vibes, movement meditation and hoop bliss! Claudia, I have no doubt that you are going to be an amazing hoop dance teacher... keep sharing your passion, and it's inevitable. Much Love to you All.